During my childhood my family visited the farm only once. It was at some point when I was in Elementary School. It is a memory completely overgrown with thorns, burs, and thickets of wild raspberry bushes. The clearest part of the memory was after we left. Mom had worn her favorite sweater and it was covered in burs. My sister Helen and I painstakingly picked out all 400 or so of them for weeks on end so we could gift it for Christmas.

More than a decade later I returned.

After calling up my Aunt to get directions I wandered down to the farm with three good friends to check it out. It was clear that the land had been abandoned for a couple decades. Trash, tires, chew tins, bullet cases, shoes, and buckets were scattered throughout. 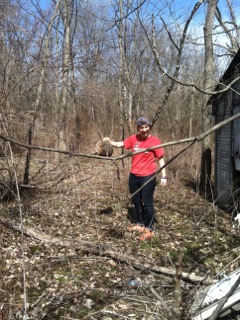 We went early Spring, early enough that the thickets hadn’t grown back yet from winter, which gave us the freedom to explore the woods. Aunt Gretchen had given me a basic idea of what might be there. We had a list of things to find: the pond, the old cabin, a creek.

I fell in love immediately.

If you looked past all the destruction on the property, past the dilapidated building that smelled like chemicals and crumbled remains of a shed, you found green bursting from every corner and a fresh Spring smell. I could feel the history in the ground.

We explored the old cabin where my mom and her siblings stayed at when they were kids. Insulation was falling off the walls and the roof was barely holding on but it still stood. Looking at the windows I could tell that the building hadn’t shift that much because the holes were still square. Absolutely incredible it hadn’t sunk in any way. 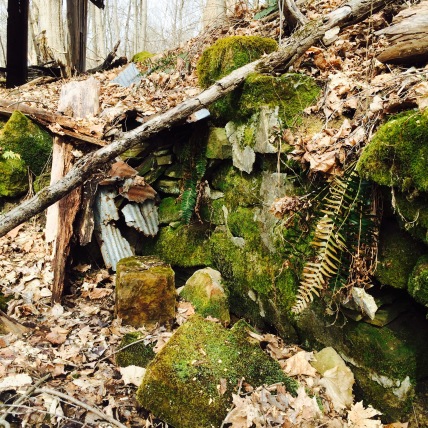 Old stones of the farm house

My next step was to determine if the cabin was save-able.