I wanted to get the cabin down to its bones to see if they were any good or not for saving. Insulation clung to the walls, the metal roof twisted and groaned, and the porch looked barely able to hold a brick, much less a human. Ideally my goal was to renovate so I could replicate what it used to look like during my mom’s childhood. I didn’t want to come into this beautiful land and totally overhaul it. My dream was to restore it.

After the first exploration it was time to get down and dirty. Armed with gloves, a backwards baseball cap, and carpenters bags me and a few friends starting picking up trash. I had jerry rigged a sled with a rope and we used that to drag the bags up to our cars for disposal. The sled was lovingly called “The Grantinator,” after Grant who so graciously sacrificed their sled to the project. Once the last tire was rolled into a pile to clear the area around the cabin I could finally focus my attention there.

My best friend Erin and I attacked it with a vengeance, ripping down old paneling and clearing out all the debris. On the way we found cups, plates, fork, old Pepsi cans, and various bits and pieces of wires. The best discovery of the day was underneath the old linoleum and particle board we found beautiful wood floors that were still in generally good condition.

We discovered the remnants of electricity and water lines, which the farm had back in my mom’s day. There aren’t even telephone lines going down to the buildings now, rather a wide passage through the thickets where trees have yet to grow. In the overgrown jungle of the farm this little passage is a breath of fresh sky.

7 stuffed giant carpenter bags and a pile of scrap metal later we had the cabin cleared out and The Grantinator went to work. Quite a calf-burning workout. Pulling pounds of old insulation and trash up a hill for a good half mile is not quite my idea of fun. 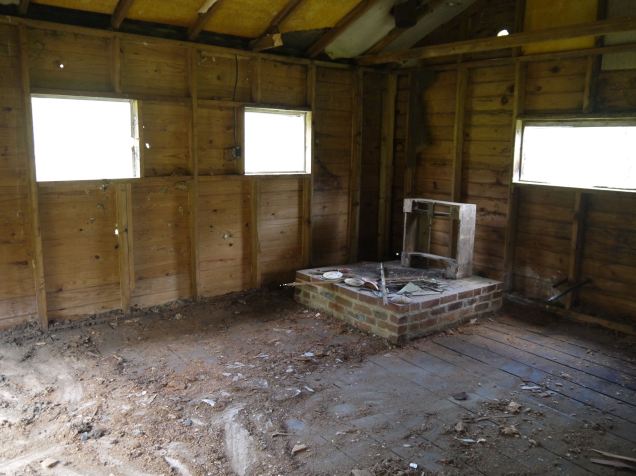 Up next: the verdict. Can the cabin be saved?