A source of constant amusement when starting a new project at the farm is what treasures I might find buried in the earth. As it’s been abandoned for nigh on 30 years, nature has truly done a magical thing: it retook what was rightfully theirs.

Since the beginning of The Project I have been using shelves found in the only shed left standing to house my treasure trove. Nails, plates, a disturbing clown sprinkler head, seat belts, mirrors, and even a skillet make up my artifacts.

Archaeology has been something I have, as long as I can remember, exoticized. As a total nerd for history the idea of digging up something ancient thrills me. It’s not just the object, which within itself is quite boring and obsolete, but the story behind it. That object gains power with the story it could weave. Like what the heck is this upsetting clown head doing down here? I’ve asked, and it wasn’t around when my mom and her siblings were kids down at the farm…

I believe it was the second trip down to the farm my partner Emily and I got totally distracted by a small creek made with the pond drain pipe. We had started to clear a little patch so the path to the shed was a bit more clear, but kept finding stranger and stranger things. 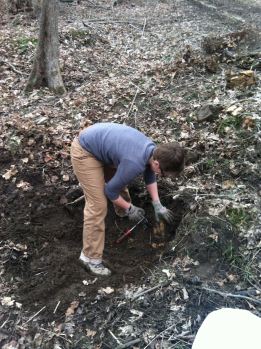 Old clay bricks were the first layer, then the clown head, then what started to look like the remains of a vehicle. Being woefully uneducated (and a decided lack of interest) about anything involving vehicles, we decided the seat belt, mirror, and parts of an engine we found were definitely a motorcycle (it’s not but it’s fun to dream).

To look at this experience with just the facts, we were basically digging up a trash heap. But to us, because it was beneath layers of dirt and earth, what was trash became treasure. It was the farm’s first discovered midden.

Middens are archeological gold. Unless the remains are the bog bodies in Ireland, the best way to determine what people ate centuries ago is to look through their trash and compost. Bits of food, ceramic pieces from broken pottery- all help to form the picture of that civilization.

I, armed with a stick and bare hands, imagined myself Indiana Jones (without all the gun slinging and Nazis). Luckily for me these middens are scattered throughout the property, so this wasn’t a one-time experience.

The first time I mowed it took me twice as long as it does now because I kept hitting pieces of mattress coil or engine parts that weren’t visible to the naked eye. Each time I clean up another part of the land I add to my museum. It doesn’t matter to me that the history is only a few decades old, which is barely a microsecond of a blink to time.

It’s my family’s history and the history of the land. History that I can ask them about…but how much more fun is it to create stories of what this plate was for and why there is a whole seat of a car in the gorge?